Fortune helps readers understand how America was built upon systems and structures in ways that blessed some and cursed others, allowing Americans of European descent to benefit from the colonization, genocide, enslavement, rape, and exploitation of people of color. 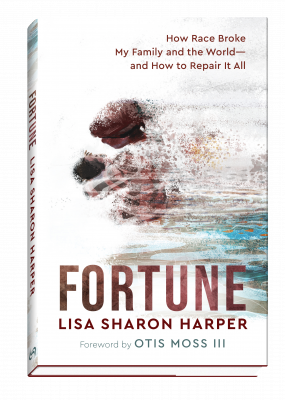 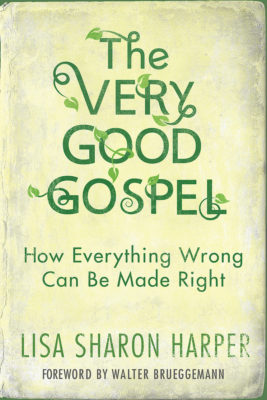 What can we do to build shalom between nations, races and genders, within our communities and families, and in our own lives? Through a careful exploration of biblical text, particularly the first three chapters of Genesis, in The Very Good Gospel Lisa Sharon Harper shows us what “very good” can look like today—in real time. Because despite our anxious minds, despite division and threats of violence, God’s vision remains: Wholeness for a fragmented world. Peace for a hurting soul. Shalom.

“We long for a world without pain, sorrow, and death. But in the beginning, when God could have rid the world of misery, God did not choose to do so. God’s governance is positioned against destruction, wickedness, and all things that cause misery. And though God does not eliminate the darkness, God exercises mercy by placing boundaries on it.” (22) “Light may take generations to come, but it will come.” (22) “The whole of our lives is a journey to return home.” (61) “In the United States, whiteness is the centerpiece upon which all else revolves.” (149)

Evangelicalism in America has cracked, split on the shoals of the 2016 presidential election and its aftermath, leaving many wondering if they want to be in or out of the evangelical tribe. The contentiousness brought to the fore surrounds what it means to affirm and demonstrate evangelical Christian faith amidst the messy and polarized realities gripping our country and world. Who or what is defining the evangelical social and political vision? Is it the gospel or is it culture? For a movement that has been about the primacy of Christian faith, this is a crisis. This collection of essays was gathered by Mark Labberton, president of Fuller Theological Seminary, who provides an introduction to the volume. What follows is a diverse and provocative set of perspectives and reflections from evangelical insiders who wrestle with their responses to the question of what it means to be evangelical in light of their convictions. What now are Christ’s followers called to do in response to this identity crisis? 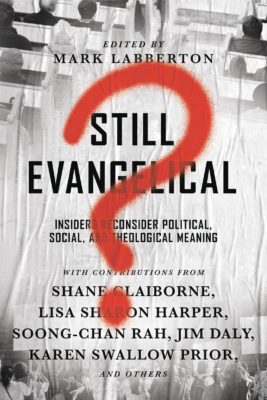 “The question is this: Will the hope of resurrection be enough to move white evangelicals toward the brown wooden altar? Will the hope of becoming human again lead to bowed heads and hunched bodies, pink knees kissing brown dust? Will lament lead to surrender?” (30) 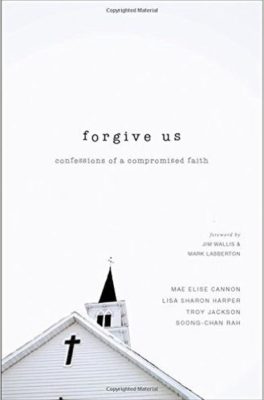 Many people have become angry and frustrated with organized religion and evangelical Christianity, in particular. Too often the church has proven to be a source of pain rather than a place of hope. Forgive Us acknowledges the legitimacy of much of the anger toward the church. In truth, Christianity in America has significant brokenness in its history that demands recognition and repentance. Only by this path can the church move forward with its message of forgiveness, reconciliation, and peace. Forgive Us is thus a call to confession. From Psalm 51 to the teachings of Jesus to the prayers of Nehemiah, confession is the proper biblical response when God’s people have injured others and turned their backs on God’s ways. Passionate and purposeful, Forgive Us will challenge evangelical readers and issue a heart-felt request to the surrounding culture for forgiveness and a new beginning.

“Nehemiah recognized that the spiritual adultery of his people manifested itself in systemic, social evil.” (25) “[Jonathan] Winthrop assumed that the Puritans had been called by God to this new world to possess the land just as the Israelites had been called to possess the land of Canaan…Yet, despite these similarities, there is one glaring disparity: the narrative of the Israelites had already occurred, and Scripture gives no indication that God will repeat the work by setting apart another group of people on another special plot of land…” (75)

How does the Christian faith shape how we should vote and participate in the political process? In Left, Right, and Christ, authors D.C. Innes and Lisa Sharon Harper discuss and explore how the Christian faith speaks directly to American politics today, but with different understanding and applications. Addressing questions like:

Harper and Innes craft thought-provoking chapters on each issue that will have America talking for a long time. 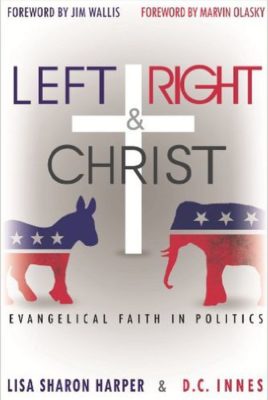 “Biblically, Liberty and Justice lay down their arms. Humanity is given liberty in order to exercise just dominion in every sphere of life.” (52 “I ask: As the health reform law is enacted over the next decade; as states file lawsuits to overturn the law; as the courts take up the constitutionality of the law, how should Jesus followers respond?…We should call for more. We must call for universal care that protects and cultivates the image of God in all of us. “To be honest, as an Evangelical who values the scripture and justice, this issue has presented me with more biblical, constitutional, and just plain practical conundrums than any other issue addressed in this book.” (on Same-Sex Marriage, 143) 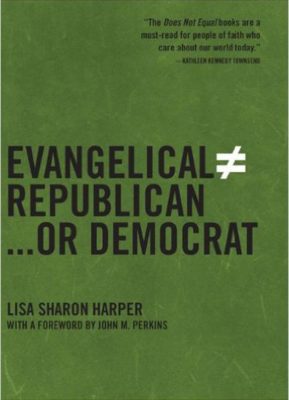 Evangelical Does Not Equal Republican…or Democrat

In Evangelical Does Not Equal Republican…Or Democrat, Harper lays out a manifesto for the new progressive evangelical movement, drawing inspiration from the biblical concepts of shalom and the kingdom of God, as well as from historical predecessors such as William Wilberforce, Sojourner Truth, and John Perkins. Harper offers a powerful indictment of the religious right, of its role in hijacking evangelical passion and dividing Christians against each other, and in an agenda that is racist and sexist to the core of its abandonment of the gospel. She shows how evangelicals, in disengaging from partisan politics, can reclaim their roots and become a new moral voice for the nation.

“Nehemiah recognized that the spiritual adultery of his people manifested itself in systemic, social evil.” (25) “[Jonathan] Winthrop assumed that the Puritans had been called by God to this new world to possess the land just as the Israelites had been called to possess the land of Canaan…Yet, despite these similarities, there is one glaring disparity: the narrative of the Israelites had already occurred, and Scripture gives no indication that God will repeat the work by setting apart another group of people on another special plot of land…” (75) 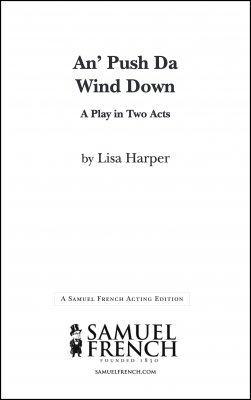 An’ Push Da Wind Down: A Play in Two Acts

Set in rural Georgia from 1828 to 1838, An’ Push da Wind Down follows a runaway slave as she heads north in search of freedom. Nellie, who cannot read, carries one thing: a roll of cloth napkins with letters written on them by her dead mother. On her way, she befriends Cherokee children and finds friendship, family, education and freedom in their village. Nellie and the Cherokees find strength in each other as the government threatens the Indians’ liberty. The key to their freedom is ultimately found in the writing on the napkins.